The world’s largest collection of works by the pre-eminent South African Impressionist Adriaan Boshoff can be seen in a world-class new art museum dedicated to the artist’s life and paintings.

The Adriaan Boshoff Museum – situated at the Orient Hotel and the multi-award-winning Restaurant Mosaic at Elandsfontein outside Pretoria – recently opened its doors. Although there are a number of large collections globally, it is estimated that this museum with its 140 paintings grouped according to themes has the largest collection of his work in the world.

Mari Dartnall, the custodian of the museum, reveals more:

Your team travelled to a number of international galleries to get inspiration for the Adriaan Boshoff Museum. What were your findings?
We mainly visited museums and galleries in Europe and the United States of America, concentrating on Chicago, Washington, New York, Paris, Brussels and the Netherlands and were inspired by their fresh ideas around different aspects of the placement, grouping, hanging techniques, lighting, and labelling of works of art. What struck us was how visually saturating it is to view hundreds of images within a certain timeframe. This made us realise the importance of holding the viewer’s attention by introducing unexpected shifts between image content and subject.

How many paintings are on display in the Adriaan Boshoff Museum?
Presently, there are 140 paintings, grouped according to themes. Although there are a number of large collections globally, it is estimated that the Adriaan Boshoff Museum has the largest collection of his works. Because Boshoff never did a self-portrait, we included several large photographs of him. After strategic consideration around the exhibition flow, we positioned his landscape paintings first, and these lead into his popular farm scenes. Next, are featured the figure paintings that Boshoff made in the early 2000s using charcoal and acrylic washes. These scenes portray various subjects playing musical instruments, ladies preparing for a romantic date, or drinking coffee at a café. After this series, we exhibited his flower studies and still-life works. Beyond this section is an extended hallway displaying his much-loved thematic oeuvre of mother and daughter. Two further sections show his methods of arriving at his compositions and works in progress. Boshoff had high regard for the importance of sketching and drawing to plan an oil on a canvas before starting the painting, to ensure a sense of harmony between composition, line and background.

There are also vignettes in the museum that give us a glimpse into the life and work of Boshoff. Tell us about these. 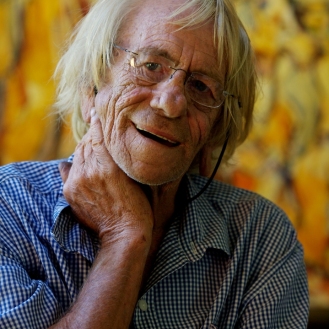 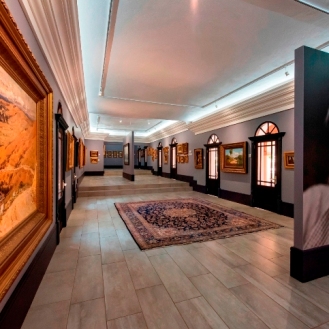 The large photograph of Boshoff at the entrance is accompanied by a short introduction to his life and artistic career. He was born on October 5, 1935. He spent his youth in the care of his grandmother, becoming independent at the age of 12. He had an insatiable urge to create. As an artist with limited means, just to start afresh with a new composition, he often had to reuse a canvas already painted on both sides by scraping off the paint. Through his tremendous dedication, hard work, and keen observation of his surroundings, he became one of South Africa’s foremost Impressionists. He continually crisscrossed Southern Africa with his family, painting the land he loved and the people of the country whom he admired.

This introduction is intended to make the exhibition accessible to the viewer in a more intimate manner, giving some insight into this artistic master’s humble way of living – at the end of his life, Boshoff’s earthly possessions could fill a small box. What mattered most to him was spending time with his loved ones, and painting. Once walking through the gallery with this in mind, we hope that the viewer will see not merely the beautiful artworks on the wall, but also experience the sense of soul and spirit that is concentrated into each painting through the artist’s memories and his unique technique.
We also have a section in the exhibition which illustrates and explains the process and progress of his working methods, since the museum collection has a number of the sketches that he drew in preparation for oil paintings. In the final section of the museum, we have a simulation of his studio, containing his two easels, paint brushes and three of the last canvasses that were in his studio before his passing. On April 18 2007, Adriaan died in his studio while still working on his last painting The Streets of my Youth.

Do you know where some of Boshoff’s other works are international?
South African embassies favour his works because of the familiar South African scenes and landscapes. They can also be found in prominent art collections locally and abroad, and have been purchased by collectors internationally and companies situated in Belgium, Australia, Portugal, Britain, Dubai and the United States. As a result, his works have acquired investment status.

Why do you regard him as a South African giant in the art world?
Boshoff developed a unique style as a Romantic Impressionist. I cannot claim to have seen any works by his contemporaries (either internationally or locally) that compare to his style. He had an appreciation for the variety of cultures and landscapes of his home country. We have noticed how people from different backgrounds relate fondly to his works, commenting on how the paintings bring back memories from their childhood, such as life on a farm, or summer playtime with their friends at a waterhole.
Boshoff and his family travelled extensively through the country, and this resulted in his developing an oeuvre that captures his era. His works have significant historic value through their portrayal of the distinctive landscapes and cultures of South Africa. These include the fisherfolk of the Western Cape, farm workers herding their cattle, the majestic cliffs of Meiringspoort, the Drakensberg, and old cityscapes. As an artist, he explored not only the majesty of the land but also how people interacted with these places.

What else do you have planned for the museum?
After the opening of the Adriaan Boshoff Museum, we have begun in the curation of the other sections of the Francolin Museum complex. The new wings of the museum will house a substantial amount of South African Impressionist art, including the works of the Cape Impressionists – Alexander Rose-Innes, William Timlin, Hugo Naudé, Terrance McCaw, Gwelo Goodman, Gregoire Boonzaier, Cecil Higgs and Nita Spillhouse, as well as older masters such as WH Coetzer, Frans Oerder, and Tinus de Jongh – not forgetting more contemporary artists such as Hennie Niemann, Conrad Theys and Lynn-Marie Eatwell. Various sculptures by Tienie Pritchard and ceramics will also be on display.

THE ORIENT MUSEUM COMPLEX
Two companies, Legacy Underwriting Managers and APBCO Insurance Brokers have, since the late 1970s, amassed an impressive art collection, featuring prominent South African artists. For them, art in the workspace has proven to stimulate creativity and a progressive work environment, and now part of their art collection is permanently on display throughout their national offices of both companies. Not only does the art collection form part of their investment portfolio, but shows that they value innovation and creativeness.
Although a large number of the collection includes artworks of important historical South African masters, the companies are also dedicated to supporting and recognising current young talented artists. The majority of this extensive art collection has, since inception, been safely kept in storage, with the vision of eventually displaying it in a private museum complex at The Orient Private Hotel in Pretoria, which forms part of their property portfolio.

The Orient Museum Complex is the result of MD, Cobus du Plessis’ passionate dedication for the arts. Du Plessis is also the founder member of APBCO and CEO of Legacy Underwriting Managers and The Orient.

This site uses Akismet to reduce spam. Learn how your comment data is processed.